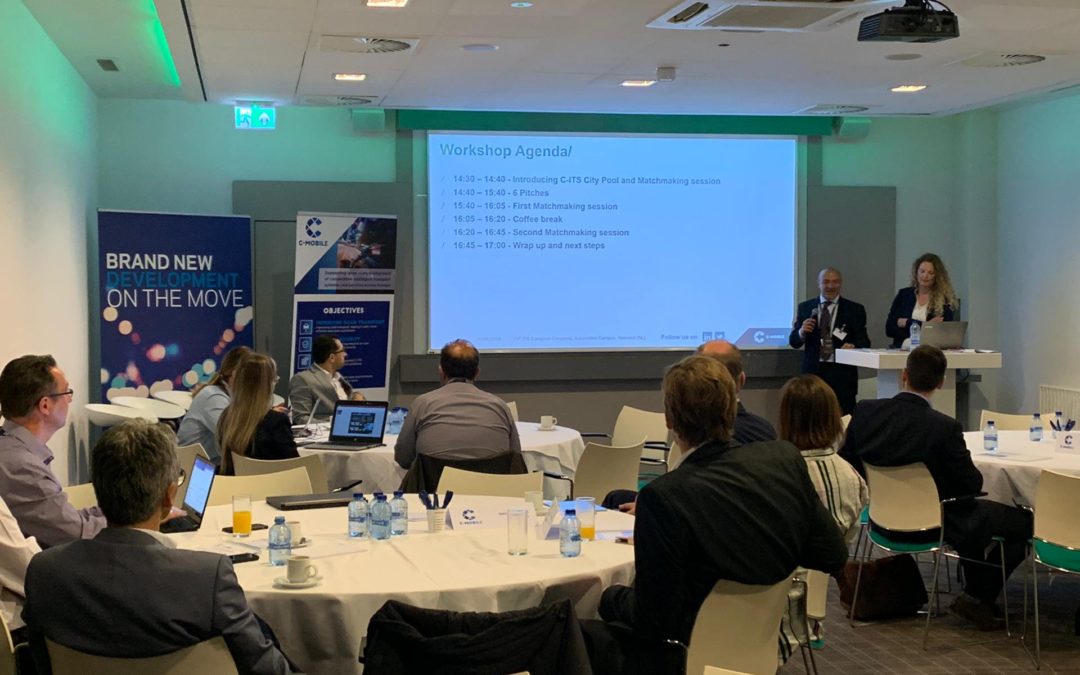 Transport authorities, traffic managers and academics gathered at the Automotive Campus in Helmond, the Netherlands on 5 June for a day of training, on-road demonstrations and exchange on Cooperative ITS services.

This full-day event dedicated to training and experience-sharing on C-ITS deployment delivered the perfect opportunity for public authorities to get access to practical knowledge, concrete demonstrations, and the latest innovative C-ITS trends.

The C-ITS City Pool is the central meeting point for public authorities involved in the deployment of C-ITS services at local, regional or national level, allowing participants to share their knowledge and experience with each other, helping foster the uptake and market rollout of ITS and C-ITS services. This horizontal cooperation is achieved through matchmaking pledges between cities committed to mutual support in the deployment of C-ITS solutions and investment in digital infrastructure.

The C-MobILE project focuses on the expertise necessary for a successful deployment of C-ITS services, and with this objective in mind, the C-ITS City Pool aims to bring together in one place best practices as well as hurdles on the way to on-road deployment in cities. With widespread implementation as the main goal, the C-ITS City Pool serves as a one-stop-shop for cities and authorities to identify requirements for deployment.

Following up on the previous C-ITS City Pool Workshop held in September 2018 in Copenhagen, this session took place on June 5th at the Automotive Campus in Helmond, alongside the ITS European Congress 2019. Paired together with a C-ITS morning training workshop offered in the framework of the CAPITAL project, the event provided a day full of exchange on C-ITS to all participants. Through the format of a matchmaking program, the afternoon was spent on the topics of Sharing experiences from cities in deploying C-ITS, Community-building for an integral approach, Business models for C-ITS and cost & benefit analysis, The European [C-ITS] Delegated Act as a legal framework for deployment, and Dissemination possibilities.

Six keynote speakers were invited to share their ideas on these topics. Next, the audience was invited in turn to hold in-depth discussions during a series of roundtable debates. In order to define concrete action plans deriving from the discussions, attendees were also asked to fill in matchmaking forms and think about possible arrangements to be made or opportunities to be spotted.

The first three matchmaking sessions addressed the topics of Business models and cost & benefit analysis, Community building and A city perspective from Lisbon:

The second round of matchmaking revolved around Engagement with non-C-ITS cities, and The City of Hamburg’s experience with C-ITS. Both topics roused lively discussions with the audience:

“Participating in the matchmaking workshop on behalf of Helmond, ‘the City of Smart Mobility’, was very inspiring” says Mathieu Graindorge, Senior Project Manager for Smart & Green Mobility at the City Council. “I better understood how cities can gain knowledge, inspiration, and perspective by cooperating within the C-MobILE City Pool. The City of Helmond is very proud to be often mentioned as an example regarding C-ITS deployment. The City Pool demonstrates that C-ITS is not the exclusive domain of the biggest cities… An integrated smart mobility based on C-ITS can be implemented in small and medium cities as well if they have the will and they cooperate together actively at European level.”

The event was wrapped up jointly by Tamara Goldsteen (City of Helmond) and Giacomo Somma (ERTICO – ITS Europe), who announced that the next C-ITS City Pool will be organised on 21st November, in parallel to the Smart City Congress in Barcelona, Spain (19-21 November 2019). The results and topics mentioned in this article will be actively followed through by the participating cities and regions, and are expected to feature at the forefront of the next session’s agenda.

We use cookies on our website to give you the most relevant experience by remembering your preferences and repeat visits. By clicking “Accept”, you consent to the use of ALL the cookies. However you may visit Cookie Settings to provide a controlled consent.
Cookie settingsACCEPT
Manage consent