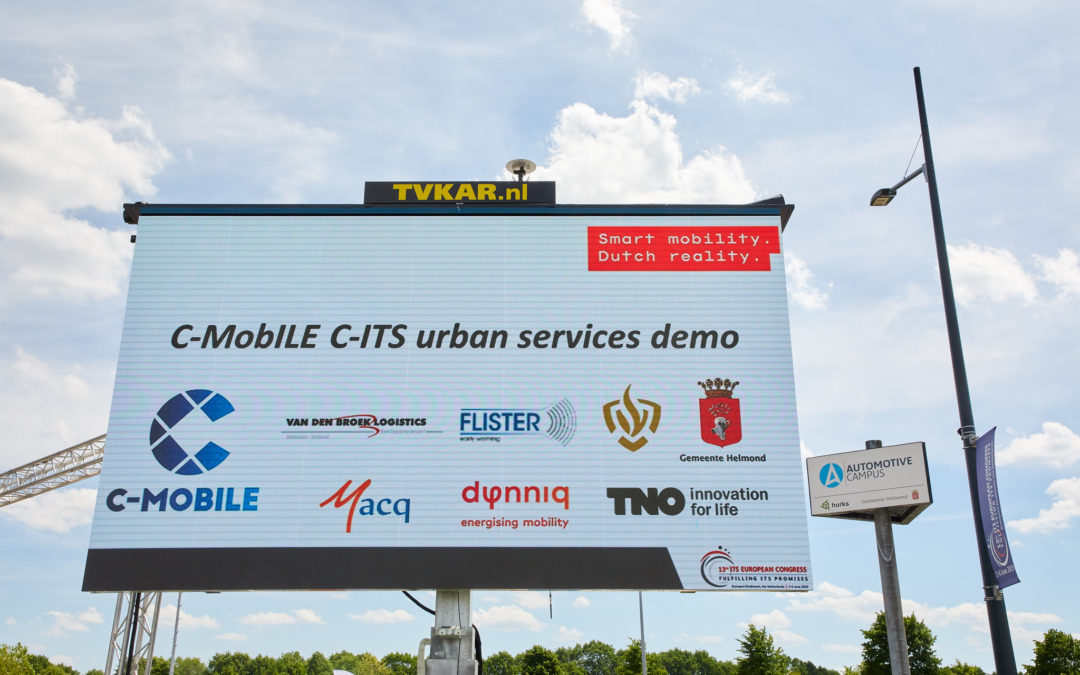 C-MobILE joined the ITS European Congress in the Dutch Brainport region of Eindhoven-Helmond as a demonstrator on June 2nd-6th, displaying C-ITS applications for traffic safety and efficiency.

The ITS European Congress provides the ideal opportunity for all stakeholders to come together, discuss and make the necessary contacts to move initiatives forward and to develop their activities by exhibiting and demonstrating state-of-the-art ITS solutions. The Congresses also showcase the latest ITS achievements from the city and region hosting the Congress, and helps raising awareness of ITS in general.

C-MobILE was present throughout the five days of the event with a stand in the exhibition area in Eindhoven, as well as live demonstrations at the Automotive Campus in Helmond. The first demonstrations were made during the open day on Sunday June 2nd, and were available to Congress delegates at set bookable time slots throughout the week.

The C-MobILE closed-track demonstration showcased large-scale deployment and interoperability between services deployed in the project’s eight participating cities and regions, which include Congress host cities Eindhoven and Helmond. Four demonstration scenarios involving cars, trucks, emergency vehicles and non-motorised users in various configurations illustrated how the C-MobILE applications can make traffic safer and more efficient for a wide range of road users as well as pedestrians. ‘We focus on service interoperability and service continuation‘ says Frank Kupper from TNO, the Netherlands Organisation for Applied Scientific Research, who supported the demonstration. ‘Services from, for example, Barcelona or Thessaloniki also work in Helmond.’ 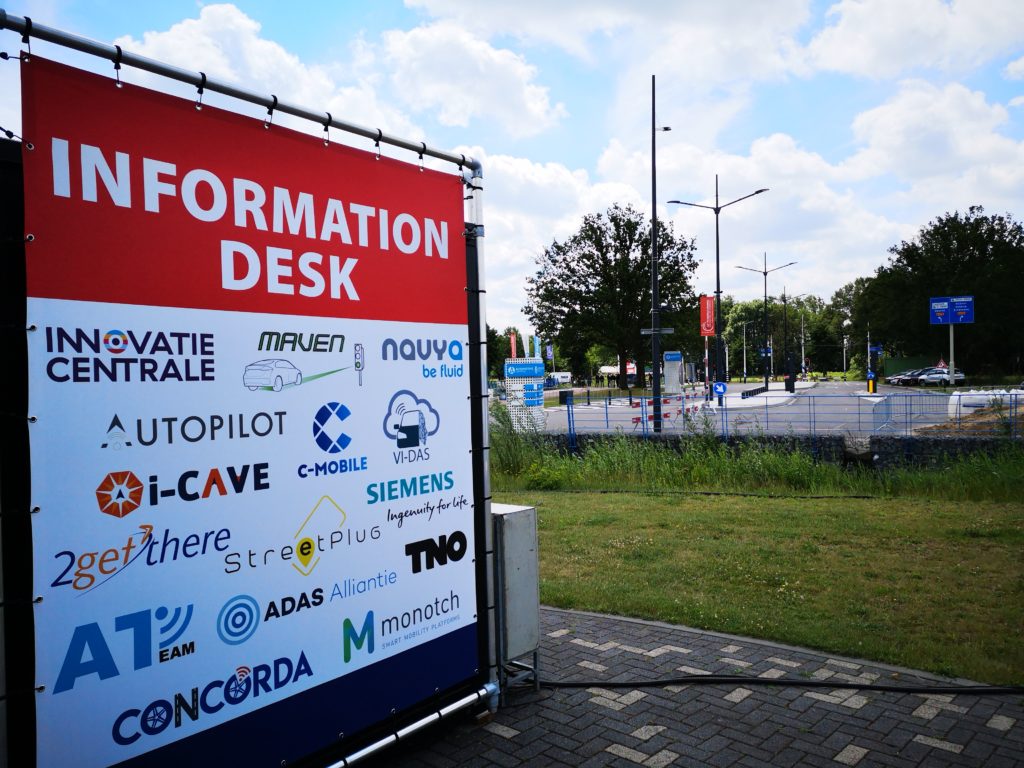 C-MobILE rolled out a selection of services showcasing the added value of C-ITS for safety and traffic efficiency, as well as the interoperability of services in large-scale deployment. Demonstrations started on Sunday June 2nd during the Mobifestival, prior to the opening of the Congress, where members of the general public were invited to experience various applications of ITS & C-ITS, and learn more about smart mobility today. ‘The Mobifestival represents a unique opportunity to demonstrate our services to visitors, and also to engage with the public, and enrol them as users in C-Mobile’ says Hugo Roebroeck, Dissemination Manager for the project.

Sections of the ‘Europaweg’ highway outside the Campus were cordoned off and dedicated to on-road demonstrations, delivering conditions as close as possible to real life. The intersection across the main entrance, featuring a complex set of traffic lights, provided a perfect play pen to show what the C-Mobile innovations can do. Three different scenarios were played out at the crossroads:

In this scenario, a car is driving towards the intersection when an emergency vehicle approaches from behind. The emergency vehicle, whose role was played by a very real fire truck from the Dutch Brandweer, has its flashing lights and sirens on, and also sends out an emergency vehicle warning wirelessly using C-ITS. The car driver receives the Emergency Vehicle Warning message via the C-MobILE application on their mobile device – in this case, a smartphone safely installed on a dashboard mount. The message includes the type of emergency service (in this scenario, the Fire Department) as well as distance and direction, giving the driver more accurate information than what the siren alone can provide, allowing drivers to better anticipate any action to be taken.

At the same time, the emergency vehicle sends a message to the infrastructure requesting absolute priority, which is subsequently granted as soon as the intersection is determined to be cleared of other traffic. The lights turn green for the incoming fire truck and red for everyone else, allowing the emergency crew to safely cross the intersection and drive on without losing precious time. 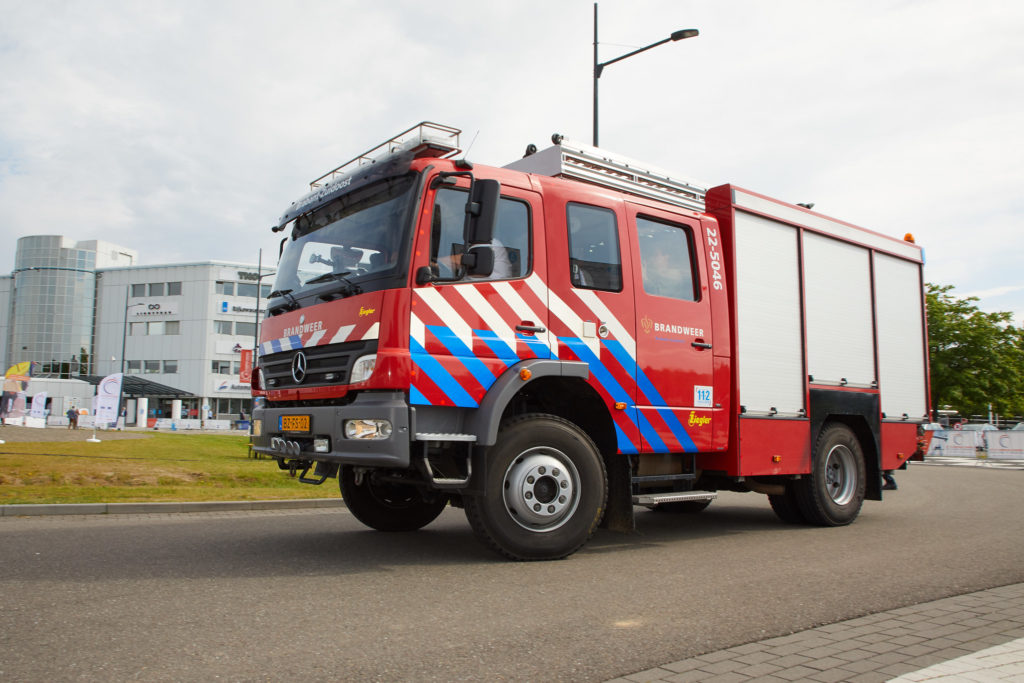 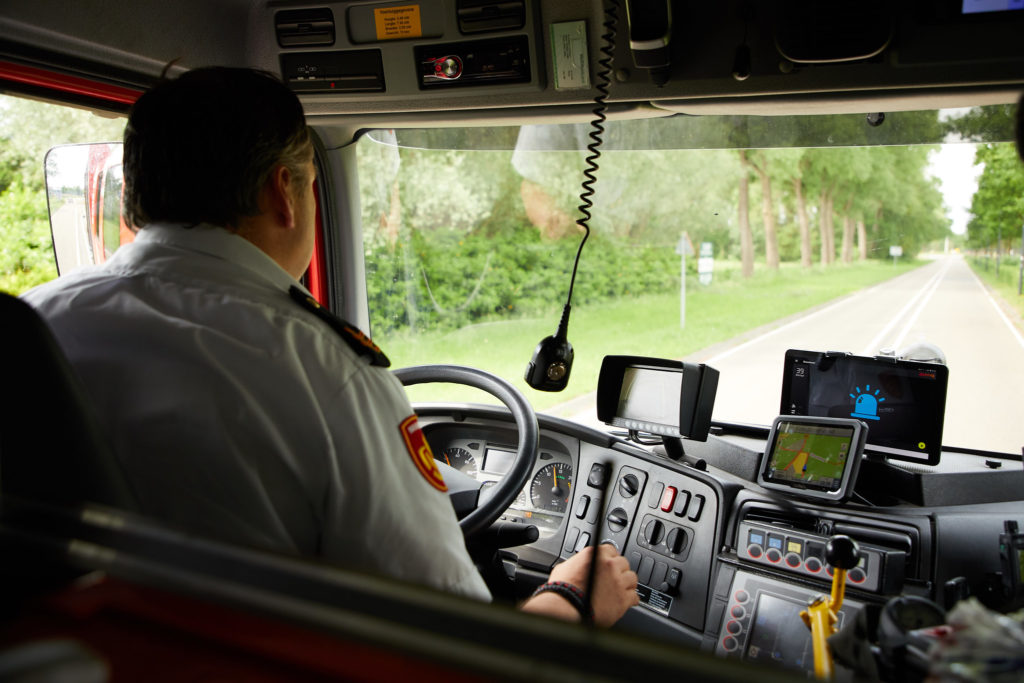 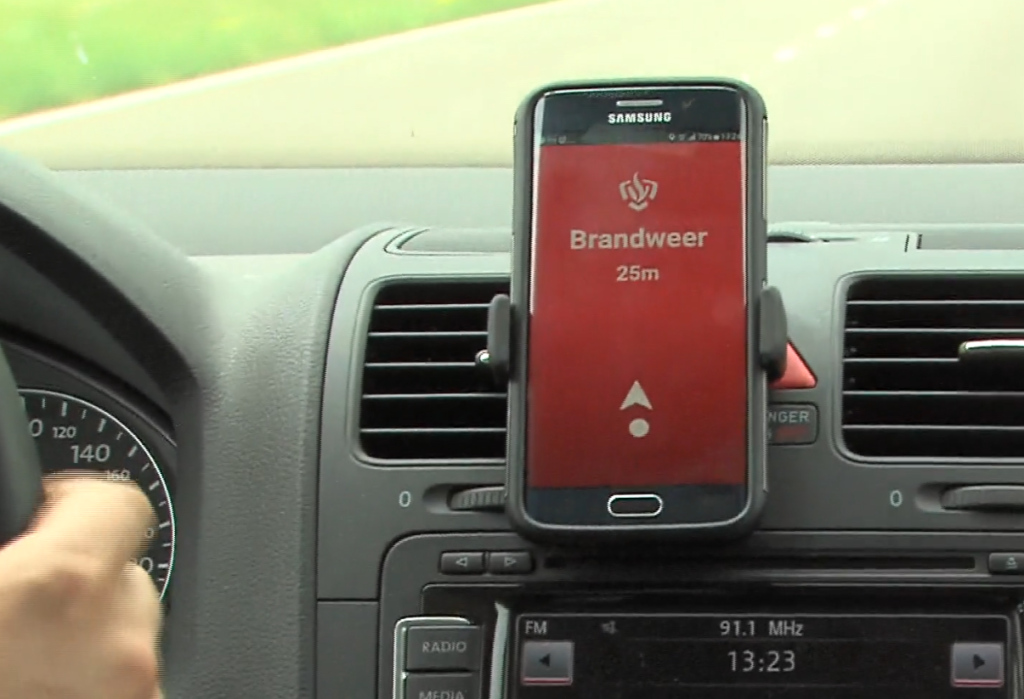 In the second scenario, a passenger car is travelling towards the intersection, where the driver plans to make a right turn. On the sidewalk parallel to the car and coming from the opposite direction, a pedestrian is walking across the road and towards the stand where the spectators are watching the demonstration. Because of the stand, the pedestrian is hidden from the driver’s view as the car is about to turn right.

Both pedestrian and car are detected by fixed cameras monitoring the intersection, and the Blind Spot Detection service identifies a conflict in the blind spot of the car between the car and the pedestrian. A blind sport warning message is then displayed to the driver to warn them that there is a vulnerable user – in this case, a pedestrian – in the blind spot of their car. The driver will therefore stop before completing the right turn in order to avoid an accident.

In the final scenario, a commercial truck is rolling through the intersection. The truck automatically requests green priority from the traffic light, which is subsequently granted. The truck driver sees on their application that green priority is granted, and the GLOSA feature displays the speed that they should maintain in order to catch the green light that was granted by the green priority service. This service increases efficiency and smoothens the traffic flow in areas that see significant amounts of heavy goods vehicle traffic. The reduction in the number of unnecessary stops for through traffic also reduces engine noise and tailpipe emissions caused by heavy vehicles leaving the intersection after coming to a stop at a red light, providing relief to local neighbourhoods and communities. 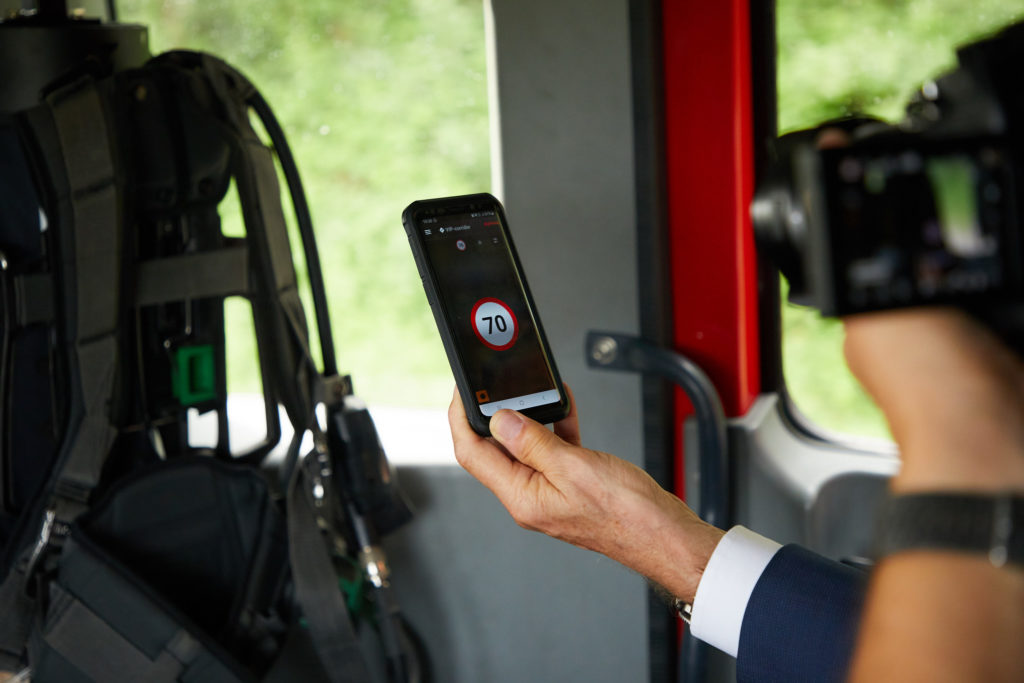 In addition to these three scenarios played out in Helmond and centred around motor vehicles, an additional C-Mobile service dedicated to vulnerable users was made available to the public in Eindhoven: the Cooperative Traffic Light for Bicycles, which was offered as part of the “Bike Innovation Tour”. With this service, larger groups of bicycles approaching a traffic light are detected by fixed cameras and given green priority. This service allows cities and communities to prioritise cyclists in a meaningful way, cutting unnecessary stops and increasing travel speed, especially on busy thoroughfares where they ride in large numbers.

With these demonstrations, C-MobILE shows its ability to offer tailor-made solutions to a range of traffic problems. The project’s à la carte approach offers ready-to-use C-ITS tools to deal with issues such as congestion, road safety, emergency response, vulnerable user safety and comfort, or even parking management – and thanks to built-in interoperability, these services remain seamlessly available across equipped locations.

We use cookies to ensure that we give you the best experience on our website. If you continue to use this site we will assume that you are happy with it. For inquiries about GDPR and privacy, contact us at info@mail.ertico.comOkRead more